It so happened that Khajuraho is not directly connected from Mumbai, either it should be gone via Satna in MP or via Jhansi in UP. Chose the latter one since wanted to cover all 3 places over the weekend.

Took the Lashkar Express to Jhansi, got down in the morning. Booked Sharma Hotel via booking.com – not so good, not so bad but pocket friendly. Got freshened up and headed towards the Jhansi Fort. It’s walk-able distance from the main town.

The Fort is beautiful and it would give you a flashback of the history that we have read in our schools, but unforunately noticed that the Fort is not maintained well. In the interior there is nice little garden where you can sit for sometime but other than that, most parts of the Fort are neither maintained nor accessible.

From there went to Orchha Palace. It is appriox 10 kms from Jhansi. You will get sharing autos from the Jhansi Bus Stop and reach Orchha within half an hour.

Once you get down, you would get the view of the beautiful Orchha Palace. Beautiful is just a very small word to describe it. See it for yourself in the photos below. 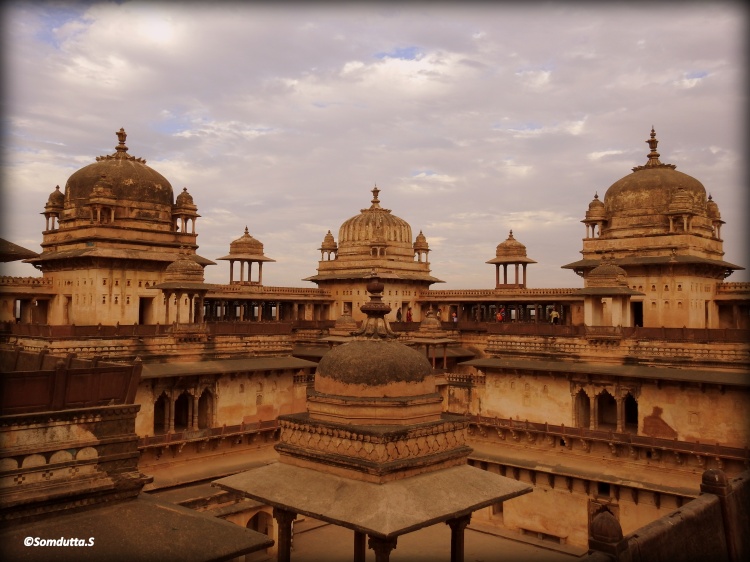 History tells that it was found in 16th century A.D. on the banks of River Betwa by Rudra Pratap Singh, one of the Rajput rulers belonging to the Bundela dynasty. It’s actually 2 palaces side by side. Rudra Pratap Singh has built the Jahangir Mahal beside the Orchha Palace in the honour of King Jahangir to welcome the latter on his visit to Orchha.

No doubt it’s beautifully and majestically crafted and completed.

There is nothing extraordinary to see in Jhansi except for the Fort. A single day is enough to cover both Jhansi Fort and Orchha Palace without hurry. Accomodation is not a problem at either Jhansi or Orchha and even Khajuraho. Lots of options available online as well as on spot bookings.

Next day headed for Khajuraho. It takes almost 3.5 to 4 hours to reach Khajuraho from Jhansi. If you opt for bus – need to change at Chhatarpur. There are 2 wheeler and 4 wheeler rent options available too. We rented a 4 wheeler.

Note : If you happen to travel these 3 places and take cab, then book cab from Orchha instead of Jhansi for Khajuraho to avoid the extra tax for the inter-state fare.

Once you reach Khajuraho, you would see the enchanting sculptured temples spread over a vast area. Built during the rule of  Chandela dynasty, there were around 85 temples by the 12th century but now only around 25 are present. Apart from being UNESCO World Heritage Site, it depicts India’s architectural brilliance at its best. The emotions, expressions and intricate details are shown so beautifully that it leaves us wondering about the extraordinary ancient Indian Art.

These group of temples were dedicated to Hinduism and Jainism depicting acceptance and respect towards diverse religious beliefs in the region. One whole day needed to visit the temples and its surroundings at Khajuraho.

Below is the Chausath Yogini Temple which is in a rectangular shape.

There are some good cafes outside the temple area. Foods served are really tasty. Lots of souvenir shops present too. The men will keep bugging you to have a look at their artifacts. Choose wisely!

Yummy pasta at a cafe outside the Temple

By evening started from Khajuraho and reached Jhansi since had return train from there. Needless to say the Art works of ancient India and the architectural beauty in these historic destinations are worth preserving and praising. Happy travelling 🙂